Singer and Cereal: Why Mr. Singer feels cereal is a great product 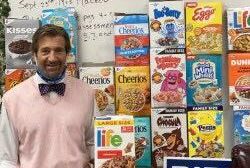 Michael Singer is a senior economics teacher who loves cereal because its multifunctional. “I feel cereal is a wonderful product, it tastes good, it’s healthy, and it’s affordable. But its also a great, great example of free market economics of which I teach,” said Singer.

His love for cereal began in college. “I learned how good it was when I was in college, and I ate a lot of cereal,” said Singer.

In his past classes he used cereal for examples. “He would relate to the lesson were learning, and would relate it to the prices,” said senior Charleey Kaplan.

He said that when his past students go shopping and see a new type of cereal, they take a photo for him to see. Some even buy the cereal and send it to him through the mail. “If you give him cereal or bring it up in class he’ll talk about either the cereal you brought in or about his cereal wall,” said senior Avril Rosano.

The fact that his past students still think about him, his class, and how he used cereal, shows the connection he has with his students. According to Singer the best way to eat it is “mixing the non-sweet healthy cereals with one of the sweeter cereals.” For example, taking Frosted Flakes and mixing it with Corn Flakes.

He shares “the proper way” of eating cereal in class. “It’s funny how passionate he is about cereal, we all laugh,” said senior Madison Micioni.

Although he has tried all kinds of cereal, he does not have a favorite. He describes it as picking a favorite child. He does however enjoy the cereal Life.

If you have ever been in his room, you would see that it is decorated with cereal boxes. “It serves as a constant reminder of the concepts I teach in economics class,” said Singer.