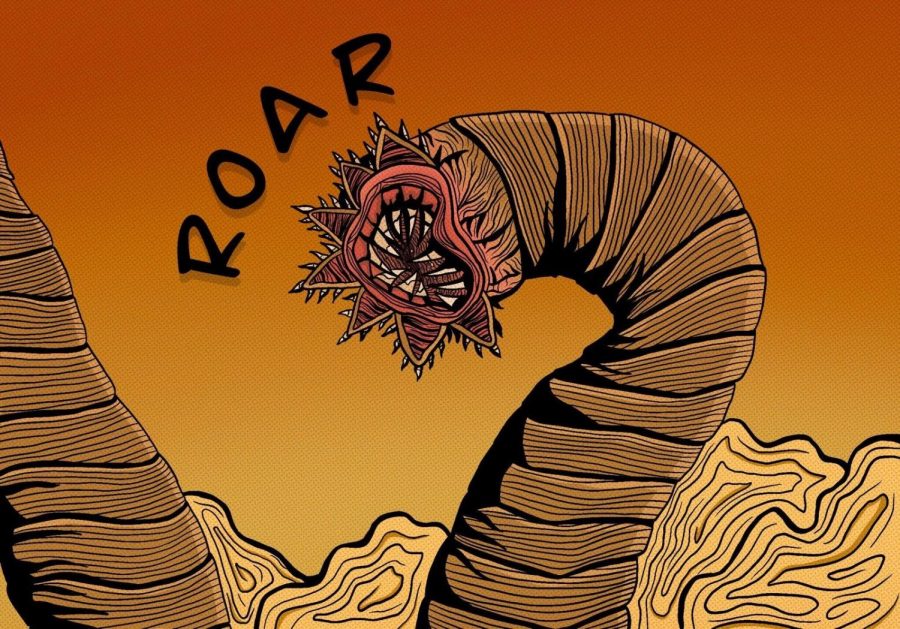 An illustration of Shai Hulud, a titan sized sandworm that resides in Arrakis, by Literary Arts Editor Madalen Erez.

The average American teenager gets up to 7 hours of screen time every day, excluding the added assignments. With the present situation our world is caught in thousands of students who have returned to school through the mobile classroom, are receiving a mammoth amount of screen time of up to ten hours every day. That time rounded up equals over 50 hours in just one week. That’s over 200 hours of screen time in a month! It is crucial for students to find ways to decrease those hours and relax too. Reading has proven to be one of the easiest hobbies that gets a student on the path of adventure and learning. Not only does reading lower our hours of screen time; it also helps expand a student’s vocabulary, imagination and writing skills. Books are a paper gateway to different worlds, mysterious kingdoms and quirky schools. Dune is a classic novel that is a great example of this.

Dune, a novel with the faint scent of melange and the distant hum of an endless desert coming from within its 412 pages. The book is recognized as a prized cornerstone of science fiction for its unique perspective in the sci-fi genre and its collection of timeless themes that reflect our world to this day. Themes on religion, question of power,

questions towards mortality and morality; throw the characters of Dune into whirlwinds of conflict. It’s a book that several, such as the Washington Post and Chicago Tribune, have called ‘an astonishing science fiction

phenomenon’. Dune is actually the first of a six part series that spans over the lives of thousands of characters and explores each corner of this unusual universe, the following book being, Dune Messiah.

The novel centers around the life of Paul Atreides, a boy of fifteen whose family has been given the desert planet of Arrakis or Dune. On the planet enriched with melange, a spice only found there and sought out by all royal houses, Paul is put to trial and must journey the unknown. “I must not fear. Fear is the mind killer,” a quote that will become extremely familiar with the audience and Paul himself. The book provides the reader a direct path into his thoughts and his unique way of thinking. It doesn’t take to be a Bene Gesserit, an emperor’s daughter or a Mentat to relate to Paul. Old fans and new, myself included, all feel that even though Paul’s world is so different from our own, you can still find yourself reflected in him.

I recently read Dune over the summer and had all sorts of thoughts. Now, before I begin I’d like to clarify that not everyone is into what Frank Herbert has to offer; yet if you’re a fan of science fiction or fantasy, this may just be the book for you.

At first glance, I thought Dune would be like any other sci fi novel with robots, aliens and intergalactic battles; but as I dug deeper into my research, I realized Dune was another perspective on Sci fi, one rarely written. Dune focused mostly on the environment and how everything on the planet worked as a one. The novel highlighted the importance of nature and finding a healthy balance within oneself, those around you and the world. With the broadness of the Sci fi genre, to read a book that details the natural world rather than technology, is refreshing and noteworthy. Also, the way the book is formatted was enjoyable, each chapter starting with a quote from a future character, providing mysterious background knowledge on following events. The way the book even went in depth on the reaches and limits of the human mind felt like a lesson being taught to the reader.

Now, as much imagery as the book can offer, those who like to watch films are in luck. There has been major internet buzz over the Dune Film trailer released by Warner Bros on September 9th, 2020. The trailer showed scenes that readers for many years only saw in their minds. The film will now premiere on October 1st, 2021, dropping the original plan of being released this December 18th. The date has been delayed due to the COVID – 19 pandemic and announcements made by Regal and Cineworld. Nevertheless, the film is directed by Denis Villeneuve and has a talented cast of Timothee Chalamet playing Paul, Rebecca Ferguson, Oscar Isaac, Zendaya, Jason Momoa and many others.

If you wish to purchase your own copy of Dune, down below are links to websites where you can buy the book at a cheap price and an eco-friendly way.