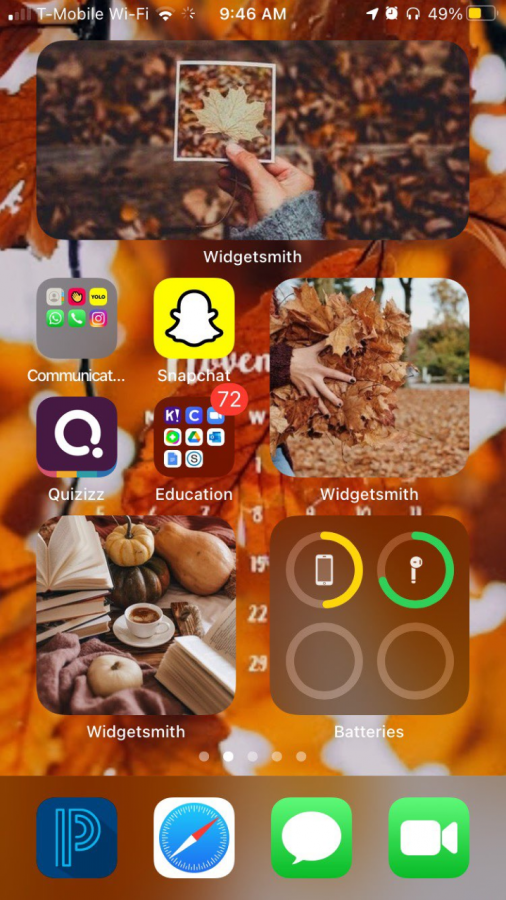 An IOS 14 home screen themed for the month of August. Nice, Creative, and Clean. Photo Credit: A. Soto

A phone is something teens spend on average, 7 hours a day on. It is their comfort space where they can go to express their emotions and creativity, and the IOS 14 update helps with just that. Creativity.

The IOS 14 update was released on September 16th, 2020 by Apple. The IOS 14 update came with a load of new content for all iPhone users, but the two features that have drawn everyone’s attention were the widgets and the compact UI for phone and FaceTime calls. “My favorite feature are the widgets. I like being able to customize my background with more than a wallpaper.” said freshman Ariana Soto.

The new feature, “widgets” allowed users to place widgets on their home screen. Widgets could be used as a shortcut to check your calendar, play music, or check the battery life of your phone, or any other Bluetooth device, such as air pods, or Bluetooth speakers. Widgets are also used to decorate one’s home screen even further. Widgets allow users to include any fun or wild pictures of themselves, quotes, or even random objects. The IOS update provides widgets in different sizes; small, medium, or large, which one can choose for their liking.

The next feature that caught the eyes of many, was the compact UI for phone and FaceTime calls. Before the IOS 14 update, phone calls used to take up the whole screen when you were using your phone. As of now, it only takes up a small portion of your screen in a banner like shape that is located at the top. Apple provides a way for you to turn off this feature and revert to the old one if you please. This option is found in settings, under the phone tab.

“To improve this update, I would tell them to stop the shortcut pp from opening every time I want to open an app.” said freshman Leyla Morris. Overall, the IOS 14 update lets you deck out your home screen in ways that help you show off your creative abilities. It also allows you to continue using your phone without any problems while letting the phone call ring in the background.