The Weeknd’s Halftime Show felt more like a Monday 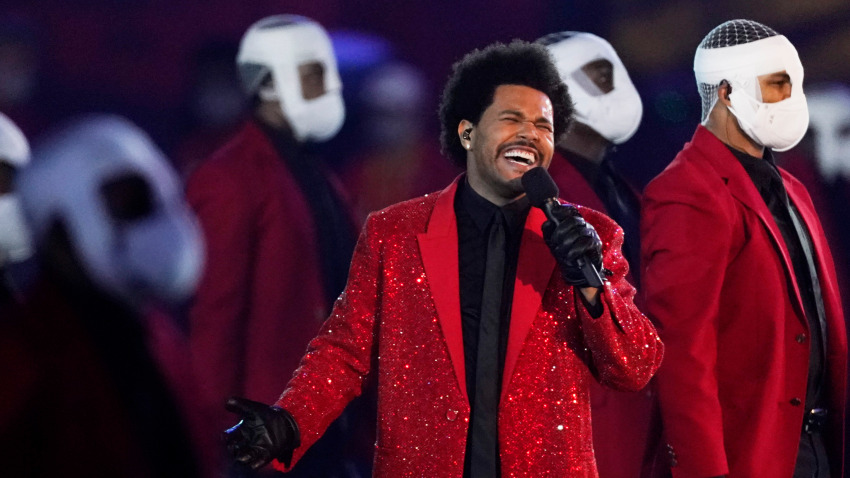 A. Landis via Associated Press

So you just watched The Weeknd’s 2021 Super Bowl halftime show and are now seeking some kind of reassurance that yes, that was the entire performance, and yes, I am just as confused as you are.

Abel Tesfaye, also known as The Weeknd, managed to pull off a show that has never been seen before—to say the least—leaving many Super Bowl goers feeling conflicted. Yes, the show had some very appealing visuals, but it also wasn’t the masterpiece that came the year before, when Shakira, someone who did not need a second guest, featured Jennifer Lopez, Bad Bunny, and J Balvin; artists who could have easily had the audience up and moving all by themselves. Although I must give Abel the leeway of performing during a worldwide pandemic, which explains why the football field, which is usually busing with fans mobbing to the music, was instead preoccupied with hundreds of versions of himself with bandages on them. Yeah. You read that right.

To make things even more complicated, like Star Wars, unfortunately you must watch the previous films in order to truly appreciate the content. The Weeknd has been planning this performance for quite a while now, as it serves as the finale in the story his new albums tells, which has been communicated through his previously dropped music videos for Blinding Lights and Save Your Tears. Abel has been promoting his new album After Hours in any way he can, from attending the MTV Video Music Awards with a bloodied face, to appearing at the American Music Awards with bandages—just like his clones that invaded the field during the Super Bowl performance. His efforts were to tell the story of a man who loses himself when searching for happiness in the wrong places, i.e. fame and quite literally Las Vegas. The entire getup is a publicity stunt, and may I say, one that seems to be working. He has sparked an interest in his fans, and made some new ones while at it. At some point he fooled his entire fanbase thinking he actually went through with plastic surgery, which would explain his recent absence in social media, and the bandages he leaked consistently. It wasn’t until multiple sources confirmed that Abel never did actually go under the knife, that the fanbase was able to exhale a sigh of relief. A sigh of relief because the “new face” that The Weeknd leaked, was just down-right unfortunate.

The Weeknd however, was certainly an odd choice for a halftime performer for a plethora of reasons, but what most would agree with—and what I keep telling everyone— is that this was not the year to have only a singular performer. I was hoping to see Daft Punk liven up I Can’t Feel My Face as it was in desperate need of it, or perhaps Ariana Grande would come in to duet Love Me Harder and completely save us from our confusion, and quite bluntly, our disappointment. As catchy as The Weeknd’s music is, his vocals are not compelling enough to make up for the fact that he can’t dance. When compared to last year’s show, when Shakira and J-Lo offered up a full course meal in the dancing department and included breathtaking quick changes, The Weeknd gave us the same red suit he has worn in his past two music videos, and what felt like an appetizer served at a ridiculously overpriced restaurant; yes, it looks pretty, but where’s the sustenance?

The music that Abel offered is catchy and enjoyable, but completely out of place considering that most of his music is about rated R activities, and this is a family show. Luckily for us, we were able to enjoy the show without any explicit words or anything too profound being sung to us, thanks to our good friends at the broadcasting networks that made sure it wouldn’t be too awkward explaining why The Weeknd is stuttering so much when he says “I’m a- I’m a- I’m a starboy,” instead of the more profane original lyrics.

I must give the man praise where it’s due, what kind of halftime show reviewer would I be if I didn’t acknowledge all the blessings given to us during the 14 minutes of questionable family friendly material?

At the very beginning of the performance, we are greeted with a grand stage decorated in Las Vegas attire. An entire chorus embellished in robot costumes, masks, and lights distract us from the blandness of his performance. At some point it felt as if he was simply preaching his ideas at a conference call, waving around his sunglasses and singing into a microphone while completely stationary.

Many claim that Abel is attempting the impossible task of mimicking  Michael  Jackson’s swagger,by the way he dresses and the small leg movements Abel incorporates into his routine. This is a dangerous move, considering that Michael Jackson performed for the super bowl halftime show back in 1993, a performance that countless performers seek to recapture into their shows today. Although I would love if Michael Jackson came down from the heavens to tell Abel to his face that what he did could never be replicated, and that “I set the bar this high for a reason, so I will be remembered forever and never be replaced by the likes of you, a man who only owns one red suit.” Surprisingly, I enjoyed the uniqueness of it all. The way that his clone-soldiers marched onto the fields, with lights built into their hands, creating a sense of anticipation and fascination. I seriously was interested to see what happens next.

The fact is, The Weeknd was not my first pick when deciding who should be the one to hype up the crowds, excite them, and give them a show that would help them forget how horrible this year has been for just fourteen minutes, but Abel did the absolute best with the horrible hand he’s been dealt. There were no other performers up on stage with him, which held the show back as a whole, but he still managed to out-perform 2019’s halftime show that included Maroon 5 and TWO other artists. Adam Levine really needs to get through his head that just because he’s shirtless, doesn’t mean I’m having a good time. The Weeknd was also able to incorporate a story, with unpredictable little details like the room of mirrors which captivated me, even if it felt like we were on FaceTime with him. The performance wasn’t Prince singing in the rain, all wet and heaving with badassery, but instead it was a fascinating show featuring songs I’ve heard on the radio the past couple of weeks, and quite honestly, not much could fill the standard Shakira set just a year ago, regardless I appreciate the effort.